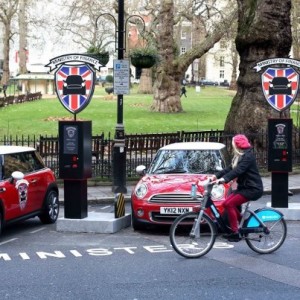 We all know the ‘Boris Bike’ hire scheme by Barclays. You need to get somewhere in London; you don’t own a bike and don’t feel like getting public transport, so you hop on a rental bike. Free for the first half hour and £1.00 for an hour, this scheme has proven to be a marvellous idea.
As the days and nights are getting rather a lot chillier than a few weeks ago however, I envisage these bikes not to be as popular as they are in the summer, being left un-ridden and eventually covered in snow.

Welcome the MINI. Apparently inspired by Barclays’ idea to bring affordable personal transport to the masses, today MINI is launching a car hire scheme on London’s Berkley Square, where you can rent one of their MINI Coopers for an hour at a time. The cost for renting? Just 26p for an hour. This is equivalent to the hourly rate should you be buying a MINI Cooper on their finance package costing £189 per month. Noted however, the car needs to be vacated once the hour is up or prepare to face a penalty.

MINI’s manifesto ‘bring Mini to the masses’ has been boosted by this so called the MINI Fun Hire Service . It will run until Christmas in London, and if successful the scheme will be rolled out to other cities in the UK, with the possibility of it becoming permanent.

The kiosk in Berkley Square will be manned by a MINI employee who will assist with the rentals. There is no need to return the car to the original spot of hire, as MINI will pick up the car from where the driver has left it.

As the MINI Cooper has low CO2 emission, it makes this car exempt from road tax and Congestion Charge. Saving money on public transport, cheaper than the Boris Bikes, not to mention being able to carry more than one person AND keeping warm through the winter (if only for an hour), this scheme, on the surface, looks to be a very clever approach to marketing.